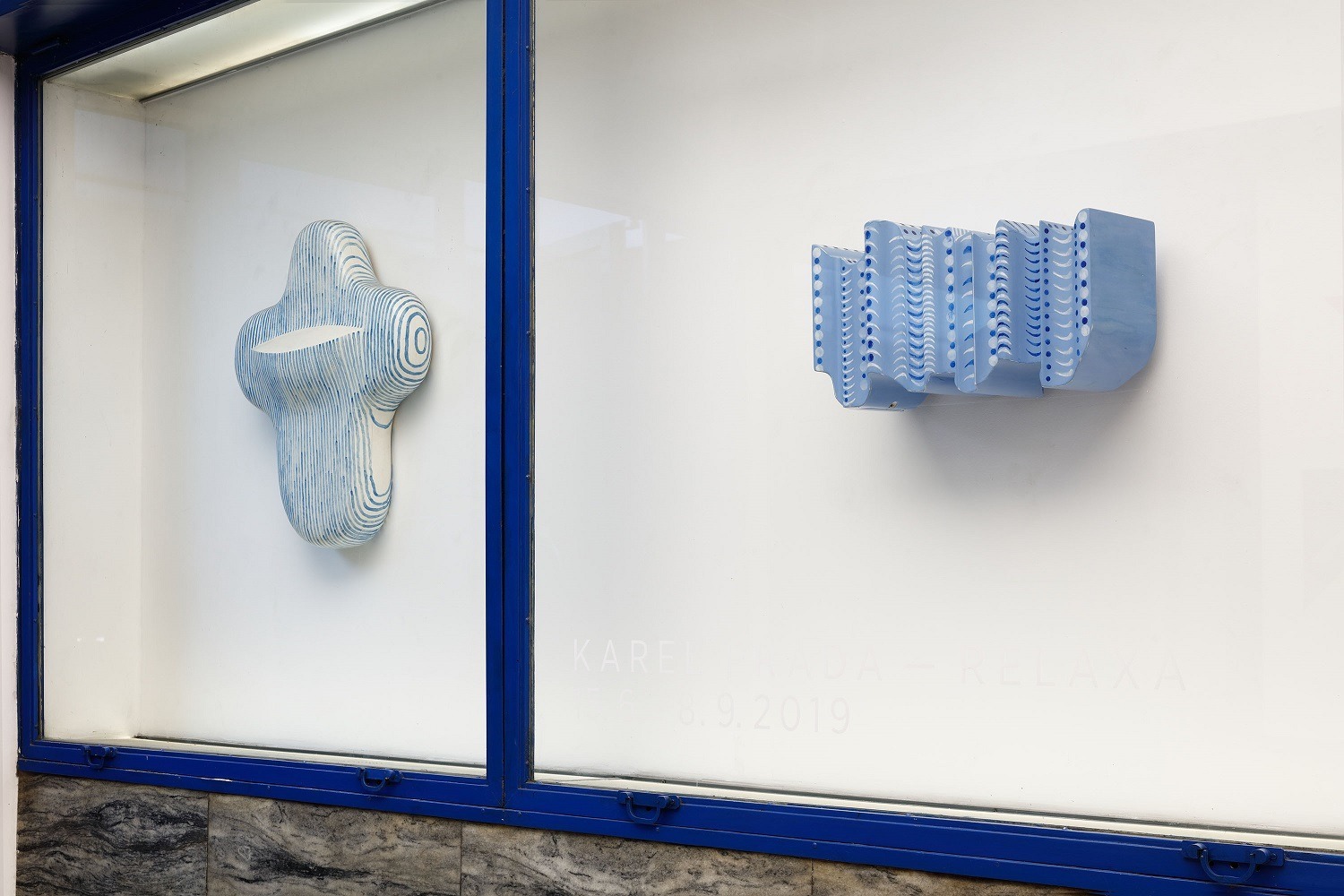 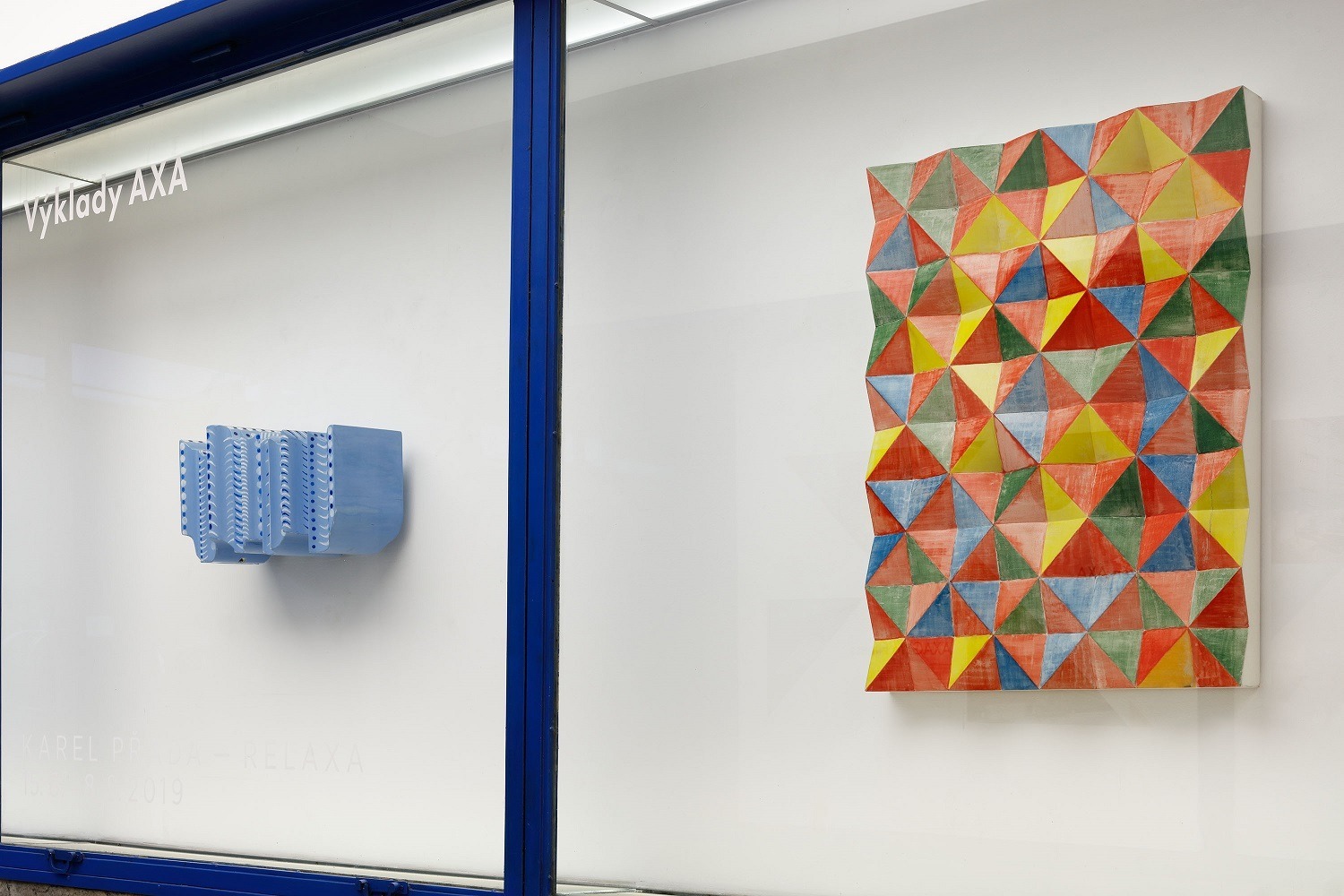 The collection of artworks by Karel Přáda displayed at Showcase AXA can be characterized by vivid imagination, playful composition and life colours. Some of the exhibited works draw inspiration from the artist’s stay in France in 2006, from the time of his studies at the Prague’s Academy of Fine Arts. Those are spontaneous relief drawings on a pure white plaster background. Karel Přáda often draws his artistic inspiration from the world of nature. As early as in his final sculpture collection at the Academy of Fine Arts in Prague, he endeavoured to portray the world of harmony, and nature as a source of positive creative forces. The collection exhibited at Showcase AXA includes an object emerging from a mirror image of a natural motif on water surface. Despite the immediate intelligibility of the theme, the eventual shape is quite complex and cannot be read in a simple way. In several of his reliefs which are displayed, Přáda refers to the haptic level of the viewer’s perception, thematizing the principle of play. The phenomenon of play also includes free action, a sense of the play itself, order, rhythm and harmony, among others. The newest relief artworks of the artist based on multifarious composition variability of a simple geometric shape have also been included in the exhibition. In Přáda’s oeuvre, we can generally perceive his interest in Cy Twombly’s sculptural objects; the biomorphic nature of works by Hans Arp or Isamu Noguchi; Paul Klee’s playful simplicity of watercolours; or the vivid colours of Antoni Gaudí’s mosaic surfaces.

Curator of the exhibition: Iva Mladičová

Curator of the exhibition: Iva Mladičová

KAREL PŘÁDA (*1980, Dačice, Czech Rep.) studied at the School of Applied Arts in Jablonec nad Nisou between 1994–1998 and the School of Stonecutting and Sculpture in Hořice between 1998–2001. He pursued his studies of sculpture at the Academy…

KAREL PŘÁDA (*1980, Dačice, Czech Rep.) studied at the School of Applied Arts in Jablonec nad Nisou between 1994–1998 and the School of Stonecutting and Sculpture in Hořice between 1998–2001. He pursued his studies of sculpture at the Academy of Fine Arts in Prague between 2001–2007 (J. Zeithamml’s atelier; in 2005, he received Bogdan Naydenov Award; in 2006, he made a study visit at the Académie de Strasbourg – V. Škoda’s atelier). He participated in many sculpture symposia, including e.g. Flur in Markneukirchen, Germany (wooden sculpture) in 2005; Almería, Spain (marble sculpture), 2006; Hradec nad Moravicí, Czech Rep. (sandstone sculpture), 2010. In 2007, an independent exhibition of his work was held at Bohnice Psychiatric Hospital in Prague. From the joint exhibitions featuring the artist, let us mention, among others: Výstava mladého umění (Display of Young Art), Fair Trade Palace, National Gallery Prague, 2006; Diplomanti AVU (Academy of Fine Arts: Thesis Writers), Prague, 2007; Nic na odiv…? (Nothing to Show Off…?), Kateřinská Garden, Prague, 2008; Vkročení do prostoru (Entering a Space), Most Art Gallery, 2010; Art Prague Sculpture, New Town Hall, Prague, 2011; exhibition at the Moravská Třebová Castle, 2011; Svoz 16 (Collection 16), Rabas Gallery, Rakovník, 2011. In 2016, he took part in a contest to select John of Nepomuk’s statue for the town of Nepomuk and his project was recommended to be executed.